Food travels through multiple stages such as production processing, distribution, retail shops or restaurants to reach your plate. During this journey, the food may become unsafe because of various factors. The most commonly used terms in case of unsafe foods are contamination and adulteration. 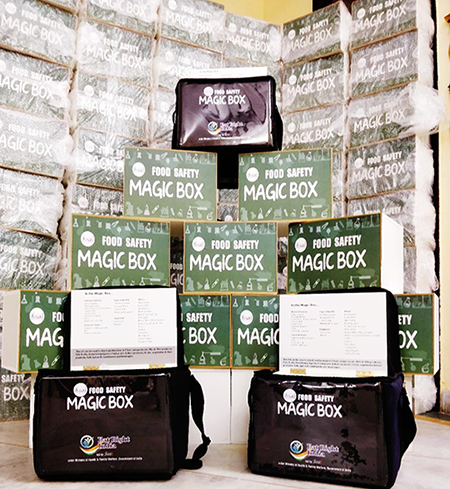 Contamination and adulteration both may involve the presence of a substance that is not tended to be in the food. The difference is that contamination is unintentional. It may result from natural causes (e.g., heavy metals of the soil that are taken up plants) or as consequences of improper quality control in the factory producing food (e.g. introduction of hair or glass pieces during manufacturing).


Adulteration, on the other hand, is generally economically motivated. It often involves intentional replacement of superior quality ingredient, or its dilution, with a cheaper alternative. For e.g., dilution of milk with water increase its volume. Not every case of adulteration will result in serious adverse health effects. However, adulteration always results in the introduction of unknown hazards and hence unknown risks into the food product.
Food spoilage occurs when there's a disagreeable change in the normal state of the food. This may be a change to the smell, taste, touch or sight of the food. Spoilage is usually caused by bacteria, moulds or yeasts; A typical example of spoilage is green fuzzy patches appearing on a piece of bread.


Food contamination, adulteration and spoilage put a lot of people at risk but it can be detected by different ways. One of the simplest ways to detect whether something is wrong with your food is through senses of sight, smell, touch and hearing. For example, signs of spoilage on fruits and vegetables are fuzzy and colored mould growth, a soft and mushy consistency and a bad smell. Other signs of Spoilage such as in canned foods include a bulging can or lid, a strong smell when you open the can, gas or squirting liquids, or cloudy mushy food. Similarly, some of the common adulterants in food can also be detected through sensory examination. For example, addition of papaya seeds to black pepper can be detected visually,


However not all unsafe and/or adulterated foods may demonstrate bad quality, that is, unsafe food may appear to be of good quality. This distinction between safe and unsafe food therefore requires basic, intermediate and advanced level of analysis.


However, at times, it is also important to go a step further and quantify certain attributes in a food. Some basic tests allow measurements to be made in a range' thereby giving 'semi-quantitative information. For example, rapid colorimetric test kits used to detect adulteration of mustard oil with butter yellow (adulterant). A drop of oil sample is placed on a colour detection strip. If adulterated with Butter Yellow, the colour of the strip changes to pink. Minimum detection limit of his test is 0.001 % or 10 ppm (parts per million). The color produced by the oil sample can be by compared with standard colour bands printed on the cover sheet to identify the 'range of concentration of the adulterant.


Intermediate tests; require slightly advanced level of instrumentation and skills. Such tests are often referred to as Quantitative and tell us 'HOW MUCH' is there in a food sample with a slightly higher degree of precision. These tests can be performed by semi-skilled technicians. For example, the Mobile Food Testing Laboratory, also known as 'Food Safety on Wheels' is a unique mobile lab that can perform 23 tests to check for adulteration in milk and milk products. It also has the facility of a rapid milk screening apparatus named Milkoscreen which can provide the values of Fat, Solids-Not-Fat, Protein and can also detect 5 common adulterants.


Sometimes it is difficult to detect very low levels of negative and positive attributes in a food or a much higher degree of precision is required than offered by intermediate analysis. Additionally, you may want very specific or targeted information about a food for example the botanical or geographical origin of honey. For all such requirements, Advanced analysis is needed which is conducted in specialized laboratories by highly skilled technicians using state-of-the-art modern equipment


For example, inductively coupled plasma mass spectrometry (ICP-MS) is often used if to detect heavy metals contaminants like lead, copper, cadmium, arsenic etc. in food. This is an elemental analysis technology capable of detecting most of the periodic table elements at milligram to nanogram levels in a food sample. Similarly, HPLC (High Performance Liquid Chromatography) is used in the analysis of low to non-volatile organic compounds like certain Vitamins. it involves separation of the various constituents in a food sample followed by their individual detection and quantification. A liquid carrier stream termed as the mobile phase (solvent) serves to carry the injected sample through the separation column and to the detector. In the separation column the individual components are separated on the basis of physicochemical interactions and the elution order is based on such interactions. The separated components are detected by the detector on the basis of absorption of light or changes in refractive index,electrochemical/conductivity changes or simply the size distribution of eluting molecules. Another advanced technique called Gas Chromatography/Mass Spectrometry (GC/MS) separate chemical mixtures (the GC component) and identifies the components at a molecular level (the MS component).The heated gases of the sample are carried through a column with an inert gas (such as helium). As the separated substances emerge from the column opening, they flow into the MS. Mass spectrometry ionizes atoms or molecules to facilitate their separation and detection in accordance with their molecular masses and charges (mass to charge ratio). LC/MS (Liquid Chromatography - Mass Spectrometry) combines the separating power of HPLC with the detection power of Mass spectrometry. The difference between traditional LC and HPLC is that the solvent in LC travels by the force of gravity. In HPLC, the solvent travels under high pressure obtained by means of a pump to overcome the pressure drop in the packed column, which reduces the time of separation.


Based on the hierarchy of different types of analysis described above, Food Safety Magic Box sits within the Basic' level. It is expected to inculcate a sense of curiosity amongst students and empower them to differentiate between safe and unsafe food.

Food adulteration refers to the process by which the quality or nature of a given food is altered through either the addition of adulterants and/or through removal of a vital substance from the food. Food adulterants refer to the foreign, usually inferior substances added to the food which may cause harm to the consumer or introduce unknown hazards in the food. Basically, during food adulteration, small quantities of non-nutritious substances are added intentionally to improve the appearance, texture or storage properties of the food.


The main type of adulteration is Economically Motivated Adulteration (EMA) which is targeted towards financial advantages. This is also known as 'Food Fraud'. The various forms of adulteration or food fraud with a potential ta hamper food quality and safety could include the following 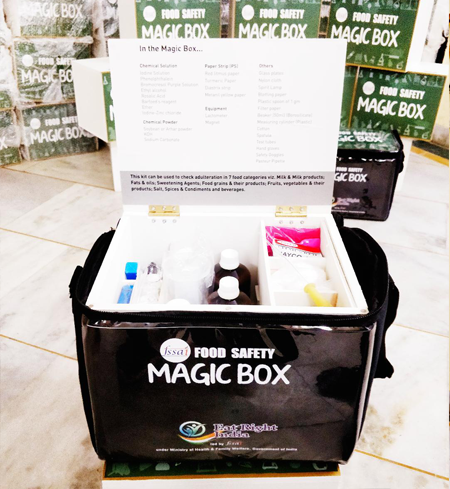 How to check if food is adulterated?

Various booklets and manuals have been provided by FSSAI related to food testing. Some of the booklets/ manuals are helpful to provide information regarding checking and testing of adulteration.


The companion book of Food safety magic box is your innovative classroom link between food science and health. So let's get started.

This Food Safety Magic Box provides you with some basic tests of sensory evaluation and adulteration for seven categories of foods namely,